Life of a reader can be difficult sometimes, especially for those prone to really falling in love with a book, series, characters, etc. My husband is able to just hop from book to book. I like to call him a book whore. I, on the other hand, get into long term relationships with books. I find an AMAZING book that just happens to be a series, SCORE! I read the first, read the second, and I’m like nom nom nom GIVE ME MORE! Only to find… Oh god… NO…. Book three isn’t out yet?!?!?! NOOOOOOOOO!!!!

This is exactly what I experienced with the Vampire Crown series by Scarlett Dawn and Katherine Rhodes. I sped through the first and I was SUUUUPER intrigued by Gwen and mildly interested in Kimber (see my review of book one, Queen of Gods, here). Immediately jumped right into the second book, King of Gods. This is where I fell in love with Kimber! Seriously. I still need to write a review of that one because I seriously love love loved it! Swoon. Buuuut I finished book two and was like, okay now let’s get into book three! I’M READY! Wait. Where is book three?! PRE-ORDER?! WHAT IS THE MEANING OF THIS?! OH. THE. HUMANITY. 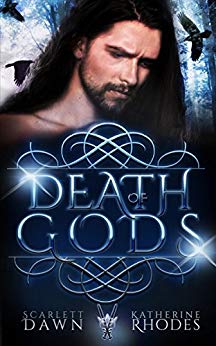 Find it here on Amazon!

So now I’ve finished book three, Death of Gods, and it was FUCKING amazing. So good. Like seriously. COME ON BOOK FOUR! Let’s start with the title of this book. Death of Gods?! WHO IS GOING TO DIE?! What?! WHY IS IT CALLED DEATH OF GODS WITH BEL ON THE COVER?! Do I even want to read this?! Yes, yes you do. *Spoiler, Bel doesn’t die* I feel like all the Bel lovers just audibly sighed. Rest easy. Our sexy vamp is still kicking. Swoon.

We ended book two and Kimber has bought down the mountain. Score! Finally, time for our worlds to connect. Maybe? I’m not sure. Reading through books 1 and 2 I still didn’t understand how the worlds connected. Is Kimber in the past and Gwen the present? Is it happening at the same time? Is Kimber in the future?! I DON’T KNOW BUT I’M STILL INTRIGUED! Well the answer we were all waiting for is answer at the end of this book. I love it. AGAIN, I CAN’T WAIT FOR BOOK FOUR! So, like I said the mountain is S’Kir falls. It’s time for the druids and vampires to reunite! Sweet reunions are in their futures, right?! Wrong. Kimber immediately gets shot in the leg by a vampire. But literally none of the druids know what a gun is. They call it a hand cannon and I almost die. Hand cannon. Snort. Kimber is trying to recover from her gun shot wound surrounded by her three very sexy men. Swoon.

After recovering from her gun shot wound her men start doing that stupid protective thing where they don’t tell the MC what is happening around her. They try to coddle and baby her. Annoying. Kimber being the badass woman she is sees right through this.

‘I am Mistress Kimber Raven of the Temple of the Lost God. I am the Breaker of the Spine. I am the Healer of S’Kir. I am not a simple woman. I am not a fool, nor stupid or ignorant. If you wish to continue to bed me, you will not hide your concerns about me or about anyone else who shares that space. If I cannot trust you three, I cannot trust anyone. Am I understood?’

Well damn. You tell ‘em girl! 😊 When she eventually forgives them, and they stop acting like asses there are some suuuuuper steamy scenes. Especially one with the 4 of them and we find out a secret sexual weapon to use against Dorian. Plus, their super steamy sexy time gives them a HUGE magical boost. Freaking druids, they obviously have all the luck 😉

During a decoy raiding party, Kimber and her group that includes Roran is taken by the vampires straight to the vampire king. Shit. So the king, Savion, is a freaking nutcase. Like literally psychotic. He murders someone in their party to get Kimber to reveal herself as the Breaker and lets the rest go. Thank god. If Roran died I would have been sobbing. For days. Whew. Kimber has to use her wit along with the help of some unlikely friends to escape the crazy king’s clutches. She has some ‘holy shit’ moments when she finds out some interesting things about her parents as well as her heritage. Can she escape and get back to her men?! Will they all survive the war between vampires and druids?!

Now let’s go over Gwen. Oh Gwen, how I love you and your badassery. Kimber is a badass in a more inventive/subtle way whereas Gwen is more in your face I’m a fucking vampire and I’ll rip our head off kinda badass. Gwen is queen and Niallan is king. They’ve just faced an attack from humans making the overlords, queen, and king have to evaluate their safety and the safety of their people. Plus Gwen and Bel are still trying to get the Original Druid Amulet from Niallan. Shit is about to go down. In more ways than one.

I seriously love the relationship building in this book. Lord Belshazzar was this scary overlord in the first book that I have really grown to love. He is up there in #1 fictional boyfriends. He is so hot. So raw. So strong. Swoon. He has grown SUPER attached to Gwen. Like enough to scare her as she is the type to usually run when shit gets real. He is the alpha in their relationship and she does not know how to deal. It’s completely obvious he is in love with her and she is in love him. It’s so obvious. I’m in love with them both. I don’t want to steal how many super freaking cute an amazing moments there are from you so I will let you read them. They are sooooo swoonworthy though ❤ We also get to see Gwen and her father’s relationship grow. He is also someone I saw as a complete asshole. He’s growing on me though and he is definitely growing on Gwen. They have some super cute father-daughter moments that are far from typical father-daughter moments but still super adorbs.

I haven’t spent much time on Gwen but it’s honestly because I don’t want to spoil anything. I want the ‘holy fucking shit ball sandwich’ moments I had for you to have to. Because seriously, there are some moments where I was just like OMG WHAT IS HAPPENING OMG WHY ARE WE SWITCHING BACK TO KIMBER WHAT ABOUT GWEN?! As well as vice-versa moments with Kimber. This book series is so amazing. I feel like the people that drop out on book one just needed to hang in there. This is an amazing world to jump into and book one did a HUGE amount of world building. Since book one did such a good job at world building we don’t spend as much time in it on book two and three. I can’t believe more people aren’t talking about this series because it is seriously becoming one of my all-time favorites. I’m serious. YOU NEED TO READ THE BOOKS.  Do it! RIGHT NOW!

6 thoughts on “Swooning over Death of Gods. Yum.”

As an Amazon Associate I earn from qualifying purchases.